Now I don’t keep an outbox file, but unless I was on the wrong type of Special K the morning I wrote that, I clearly remember having quoted another statistic hot off the press at that time – to do with, ok, be brave – “far less old people”.

As a matter of fact I’m something of an economic refugee here in CR – having fled from many EU countries precisely because they were full of young working people, you know the sort – you meet them at party and they ask you what you do, and before you’ve even considered potential comradeship you find yourself arguing over the merits of distance versus residential MBAs and career advancement junkets.

And this is when they’re only 23years old and only starting to sprout grey hairs and varicose everywhere. Hey Man/Woman – I was always in the happy position of making megabucks more than any of them, and would probably have continued doing so if I had a social outlet with others who could get a life – so what did I do, but counted my Megamegabuck collection and nosed around the hotspots of idleness, carefreedom and beauty, found I didn’t like sailing so much so rejected Monaco, Liechtenstein was too hilly for cycling, and so found Brno – 1000s upon 1000s of beautiful people who don’t want to work, and who, being voracious consumers of everything, of course need funding, work in the Cerny (sorry… miles), Black (read Mafia) Economy – and have all the more reason not to blab and bore about it socially.

They won’t move their cutely shaped asses to fill the stalls in our many gleaming new ‘greenfield’ factories some km out of town, (eventually filled by busloads of thirsty Lvovians from Ukraine’s $5 GDP wild west). Hear that Schroder? Schussel? Brussels?

These jokers in Vienna and Berlin reckon they’ve swung a heroic treaty for their protestant peoples by slapping a 7 year moratorium on Moravians taking jobs in Austrian lederhosen factories! Good one Boys! So that’s why I likes it here – 20 healthy % of people unemployed – statistically same as Goa, Phuket, Sydney’s Bay area, San Marino and all the other good global party zones.

So that was my objection, but remember my choking, my surprise element? Why did you substitute the original “old people reference”. Has PC Cropper (of English media fame) grabbed a seat on the board? The bored venture capitalists in Prague have promised you big bucks for a new corporate HQ if you cut back on offending people?

Last week the London Stock Exchange launched a new “FTSE 4 GOOD” ethical/ moral/puritan/prurient investment fund – How nice! the gentle caring compassionate face of capitalism! your firm’s got no chance of a heller if you so much as call the chief honcho a “chairman” – no sireeee/madaaaaam – we’re now talking chairperson, and we gots to find a more unilaterally sensitive term for “members of the board”, etc. The you’ll get the moolah, and you too can be the next Globopolis.

Sure I checked the rest of the mag and found the caring, compassionate, one-eyed lame bumblebee-loving tone throughout. Eerily reminiscent of reading the Prague Business Journal except that Mile’s article had more business news, but the same innocence, shocked and horrified tone. So is this the way forward?

Recently there was a new report from some don at Harvard published to do with the actual damage to society that all this PC business can cause (Economics of Political Correctness April 2001).

Clearly the hospital doctor that the bucket girl went to (Think Magazine #45 Expatella) hadn’t read it, but the report concentrates on analysing the propensity of upwardly mobile policy advisors to advise a policy direction which is completely divergent from their real logical conviction, pass this on in their report to their political or corporate masters – and he-ho, this is the actual policy that is implemented, just ‘cos folks is afraid to say what they think for fear of affecting their vertical motion up the greasy pole. Examples cited were the ridiculous gamesPERSONship played out in the whole Affirmative Action thing in the US.

Criticise it and you’re an Alabama racist, and you’ll never smell the Oval office, baby. The only conclusion the report makes is that the social ‘necessity’ for a PC approach to things is just about disintegrated, as the vast majority of people have come around to sensitivity for the issues PC tries to make a fuss about, but, by entirely other means and directions.

The last century has seen stomach-churning wars, famines, etc, has seen women all but running the world (Thatcher, Madonna, Barbara Bush, etc), gay golfers, etc – so everything is out, open and unmolested in these spheres that might have had a case before for a PC language campaign to raise their profile. So I hereby declare PC dead. RIP.

Just a couple of other things bothering me about Issue #45 (apart from Jeepster, of course) – first is that moaning victimist attitude of bucket girl who went to the hospital in the middle the night – if you want a reason to rush home to Minneapolis, then you’ve got it, and tell all the people in your local diner about the barbarians over there in “yewwrope”! “wowwwww! so brave! ”

Maybe ya gots da looks, baby, but this Czech doctor on the pull at that strange time of morning beats me. I’m not much of a babe, but in many professional places that I go, I’m often asked for my phone number also – usually by enthusiasts to find a native speaker to teach them English, sometimes even for a beer to improve their conversation; I rarely agree, but if I needed some bragging material for my friends, well, then, maybe I could dress it up as an attempt to pull me! and the same goes for the classroom guys – I mean give us some verbatim quotes, and let the Think readership be the judge of these sexual harassment allegations (also could FEMALE readers please write with any hard facts re: incidences of a CZ guy actually trying to pull?)

A major European airline lost it’s enterprising CEO last week, due to such an allegation form an ancient ex-Cabin Crew worker director on the board of the airline, who alleged an incident having taken place 8 months previously – but strangely only aired the allegation some days after she failed in a payraise negotiation for her crew.

But now the guy’s gone, his career poleaxed, and his successors will be careful never to think with their heads but to beware of that big PC stick is that phallic instead.

Second problem is Edelman’s crusade for ethnic openness, mandatory anti-fascist fights, etc. First you left Irish off your list? Why? Second I see Prague as a uniquely proud city with significant Jewish influences and thriving successes- I mean just hang out in Parizska, (if you can afford it) to see what I mean.

Thirdly you should find some new dinner-companions, as these guys you’re hanging out with now have the extra-velky chips on their shoulders with the religion thing – you make it sound as if your meal was destroyed because you couldn’t chat up this girl in Yiddish. And finally, who’s oppressed in this free country? Roma – only arguably (don’t even think about arguing this unless you’ve done some reading AND been to a Roma rights centre!)

No – it’s the US teaching population flooding the market for 200kc per hour, and oppressing themselves, reducing themselves to such a commodity here while they are on permanent standby to the Pavels and Petras who are lapping up your skills and will shortly be taking your future careers back home when all you have is your memories of your pioneering life moaning about the bad elements in big, wicked, uncaring ex-commie Europe.

Are you a teacher Todd? So forget about the fascist meetings, as they will only get the publicity they crave if you show up (FACT!), and go to some good ol’ fashioned hotbed of revolutionary coffee with some new friends and decide how you’ll do something good for your country, this country, and all the others on your list and create the world’s first language teaching cartel in the worlds’ newest market economy (min 500czk/hod with ‘scabs’ ostracised from Bohemia Bagel)… and you will be everybody’s newest and most secular hero? 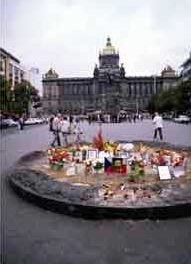 Mixing up a strange brew