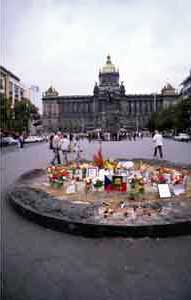 I was even more amazed by the fact that most people were reading actual books, a few being the cheap copies that one buys at the metro, but most of them novels. This had such an effect on me because I had just come from the deep south of the U. S., a place where someone reading a book in public is likely to suffer ridicule for being “stuck up” or not “keeping it real”.

A southern comic once told of sitting in a diner, reading a book, and his bee-hived waitress coming up, smacking her gum, and asking “Whatcha readin’ for?” Nuff said.

I have to say my first days here were quite a breath of fresh air. Of course, anyone who just moved here would disagree with my observations, or perhaps accuse me of embellishing to make a better story, and they would be right to do so, because just in the past two years there have been leaps and bounds made down the intellectual sewer.

The more Czech friends I made, the more I began to notice a certain national self-concept. When I asked my girlfriend about what I had been noticing she quickly confirmed my suspicions about the way Czechs truly see their people and their nation: they think of themselves as a nation of intellectuals, and the Czech Republic as one of the few remaining havens for serious pursuits of culture and the arts, as well as science and more left-brained pursuits.

Once I heard this confirmed a lot of things in this country started to make a lot more sense. The Czechs are loathe to show ignorance on any subject lest they open themselves up to criticism, whereas Americans not only freely show it but often revel in it.

This fear of ridicule can often cause problems. It explains the hundred of time you have received the wrong directions, or been given an absolutely incorrect answer to a simple question, or why (if you teach) your students who requested only conversation classes offer only three syllable sentences.

On my way out I see the shower hoses, in different colors and materials. Why did this happen? Because all three of them didn’t want to admit that they didn’t know something as stupid and trivial as where the shower hoses were.

All in all, though, I think this attitude is a positive one. It is generally not used as a vehicle for feeling superior to other nations, unless of course these nations are Germanic or American. However, as I said before, this self-concept is disappearing under piles of tabloid newspapers, celebrity magazines, and USA network specials. People are buying guns in record numbers, driving SUV’s and moving to suburbs outside the city.

Worst of all, TV Nova, main perpetrators of the Czech descent, have just unleashed the heaviest assault on the virgin Czech brains: The Jerry Springer show. It, unfortunately, is doomed to success, as the Czechs who watch it will have the comfortable distance of knowing that they are just watching a circus of crazy Americans beat and yell at each other, and that these apes on camera are nothing like themselves.

Of course, with every “uh-uh girrl” and “snap-snap” that is translated into their language, their brain cells are eaten away, one by one, and they become more and more involved. Perhaps this is only truly disturbing to those who have seen where the story ends. 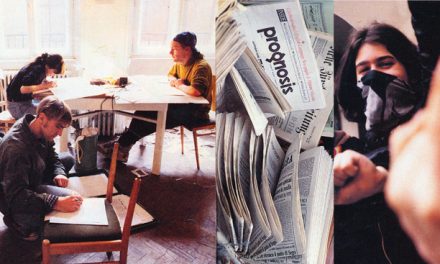