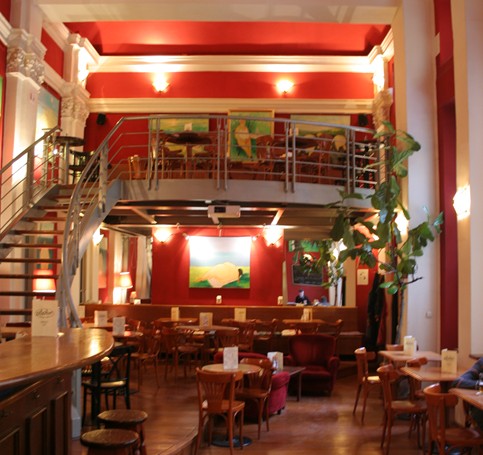 Cafes have a long, illustrious history in Prague. Prior to World War II, the city’s ethnic mix and vibrant art scene provided fertile ground for cafe society. Today, most of the famous establishments from that period are long gone, along with the singular society that created them.

But a respectful number of new cafes have opened in recent years, many with the same laudable goal of providing a home to Prague’s arts community.

Visitors may not yet encounter the likes of Rainier Maria Rilke or Franz Kafka, but who knows? Those grubby guys in the corner hitting on the waitresses could prove to be tomorrow’s artistic geniuses.

Opened by five Americans in the early 90s, it has gone through many changes but still remains a favorite among expats, who have pounced on its ample supply of new and used books, espresso drinks and healthy food. Readings and publication release parties are common here, and the bulletin board overflows with messages between fellow foreigners. As a magnet for non-Czechs, The Globe has paradoxically become something of an heir to Prague’s rich history of cafe life.

Cafe culture grew out of the city’s traditional multicultural atmosphere, a result of Czech, German and Jewish commingling, and hit its peak between 1900 and 1930. While there was still plenty of ethnic strife (some of it perpetrated by German youths against Jews and Czechs, remarkably resembling the activities of skin-heads today), alongside it flourished an intellectual exchange that found its home in coffeehouses.

"Cafes were important gathering places for every group," said Charles University history Professor Vladimir Nálevka. “Each community had its own cafes and intellectual centers, but there was some common ground and (the groups) influenced one another.

A prime example of this was the Kavarna Arco, at one time the chief meeting place for Prague’s Jewish/German intelligentsia and, according to Nálevka, Prague’s intellectual center.

Its literary circle known as the "Arconauts" included journalist Egon Erwin Kisch, poet Franz Werfel, Franz Kafka and Max Brod, Kafka’s friend, editor and biographer. Brod, himself a German speaking Jew (along with about 85 percent of Prague’s German residents), was a key link between Czechs, Jews and Germans and helped artists from every group gain exposure.

From the Globe, head on to Vodíčková and catch a tram to Dlohá where it crosses Soukeničká until you reach the experimental space Roxy/Nod (Dlouhá 33, 110 00, Prague 1, http://nod.roxy.cz).

The legendary Roxy club is downstairs, in the past a theater for the Jewish community, and has since admirably maintained its unhygienic atmosphere, solid musical lineups and awesome high energy mixes on DJ nights.

NoD, too, has preserved its artsy, moody ambience. While it sports a sizeable group of regulars who tend to dominate the tables, everyone is welcome to take in the artworks, great coffees and deserts, just leave the poseurish black beret at home, okay?

When events are playing downstairs, the cafe gets crowded, reaching critical mass before midnight. It’s far more relaxed during the day, though it may be difficult to write a letter or simply float off while art noise is blasting from the speakers.

After NoD, head on over to Hybernská Street, where you’ll see the blue neon of Kavárna Arco (Dlažděná 6, 110 00, Prague 1, Czech Republic, +420 974 863 542). Today it bares no resemblance to its former self, having been completely remodeled and subsequently closed down and reopened.

Now turn right onto Hybernska and take it to Náměstí Republiky. You can’t miss the gilded, art nouveau Obečni dum (Municipal House) across the street and to the right, bordered on the left by the medieval Prasná brána (Powder Tower) (where Max Brod used to wait every day at 2 p.m. for his less-than-punctual friend Franz Kafka).

The Obečni dum was built in the years 1906 to 1912 as a proclamation of Czech identity, initiated by the Nationalist Czech Patriotic Society. Containing a concert hall, restaurant, wine bar, cafe and salon rooms, the indulgent art nouveau construction served as a Czech cultural center for the exhibition of works by top local artists and designers, including Alfons Mucha. It was also the site of Czechoslovakia’s proclamation of independence, enter the interior check out the cavernous cafe and feel the history.

Since the end of Communism the Municipal House has probably seen more people pass through its doors than at any time since its nationalist heyday. In the cafe and Martini Bar you’re as likely to hear English and German as Czech, while in the pub your Czech-speaking opportunities dwindle further still. In Cafe Nouveau’s favor is the fact that its gorgeous interior has not been changed, and the atmosphere manages to blend elegance with informal mood.

Brod, a German-speaking, Jewish Praguer, was a central figure in the literary flowering of early 20th-century Prague. He was devoted to promoting the works of artists from all three of Prague’s major ethnic groups (Germans, Jews and Czechs).

Among his many other beneficent acts, Brod saw to it that Jaroslav Hasek’s novel The Good Soldier Svejk

was translated into German and sent to the German stage; he translated into German the libretto of Leoš Jánaček’s opera Jenufa; and he compiled and edited Kafka’s works after his death. Kafka had asked Brod, his best friend and supporter, to burn his writings. But, as Brod later noted, Kafka knew full well he would never do so.

Brod was also a successful writer in his own right, though he is not as well remembered today as his best friend.

Kisch was an ace reporter. Some of his most famous writing recorded a month he spent in a Nazi prison in 1933. He was a member of Cafe Arco’s "Arconauts," but emigrated in 1933, first in solidarity with Germans exiled from the country and then out of necessity, as he was Jewish.

After living in France, the United States and Mexico, Kisch finally returned to Czechoslovakia in 1946 and died in 1948.

Born and raised in Prague, German-speaking Rilke spent most of his adult life away from the city. He grew to hate Prague, which he once called a collection of "subjugated existences." Rilke wrote Tales of Prague, inspired in part by Cafe Slavia, which he once frequented. Though his poetry is famous worldwide, Rilke is little-celebrated in his homeland. His most famous works are Letters to a Young Poet, Duineser Elegien (Duino Elegies)

and Sonnets to Orpheus.

However, he later became a dissident and signatory of the Charter 77 human rights declaration. Seifert’s poems, set in Cafe Slavia, were born of his days as a regular there.

In the first years of this century, this spot at the corner of Old Town Square and Celetní Street was home to a coffeehouse salon whose intellectual concerns attracted the likes of Albert Einstein (Charles University theoretical physics professor 1911-1912), Franz Kafka and Max Brod. Einstein explained his theories at these Tuesday meetings, so inspiring to Brod that he wrote a novel based on Einstein (in the guise of Johannes Kepler), Tycho Brahe’s Path to God

Rewritten from an article that originally appeared in Prognosis. 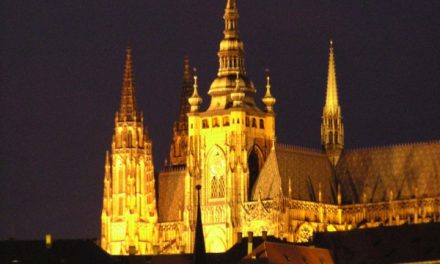 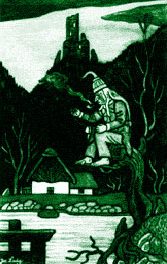